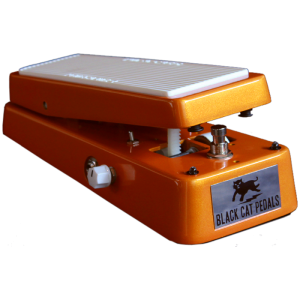 The Black Cat Monster K-Fuzz is the horrific byproduct of nefarious experiments conducted by crossbreeding the Black Cat Custom K-Fuzz with our Deluxe Mona Wah. The result is that we've created the Fuzz to End All Fuzzes! This K-Fuzz is a fire breathing, earth shaking, rip-roaring monster of a fuzz. Guaranteed to strike fear and dread in the hearts (and ears) of your bandmates, neighbors, audience, and the world at large. Studio engineers and soundmen will flee in terror as the Monster K-Fuzz unleashes the sound of planets colliding.

We started with our Black Cat Custom K-Fuzz, which was a sonically and structurally superior version of the 1960s Kay Fuzztone with an added an output buffer at the tail end of the circuit to compensate for the large volume drop that the original Kay suffered from. The Black Cat Custom K-Fuzz was a nasty beast of a fuzz to begin with. But then we added some new features, which have turned the Custom K-Fuzz into a MONSTER K-Fuzz!

First, we applied our 3-position voicing option that we used for the Deluxe Mona Wah to the K-Fuzz. Then we added a 3-position diode switch that allows you to choose between germanium (like the original Kay Fuzztone), silicon (like the Custom K-Fuzz), and a specially selected Schottky diode pair. Finally, we added an input gain adjustment pot, just like the newer Deluxe Mona Wah has.

The new K-Fuzz also features a specially designed pot by wah master Joe Gagan. The taper allows for a smoother, more gradual transition between the bass tone and the treble tone. This is a huge improvement in functionality that allows you to create sweeping waves of fuzz or a slow building fuzz tsunami.

The new Black Cat K-Fuzz has the same orange sparkle finish as before, but the tread and other appointments are now white, which gives it a somewhat innocent appearance. Do not be deceived! This K-Fuzz may look like a lovely sweet orange and white creamsicle, but what lies beneath is a fuzz of unspeakable wrath and fury.

INPUT GAIN: Controls the amount of signal going into the pedal. Start with the control set around 2 o'clock for single coil pickups, or noon for humbuckers. Or you can overload the fuzz circuit by cranking it up all the way for maximum mayhem and fuzz carnage.

INTERNAL TRIMPOT: Controls the overall output volume of the pedal. You can set this trimpot in whatever way suits you best. If you tend to favor the germanium diode setting, you may want to raise the output volume, since that setting has much less volume than the other two diode pairs. Remember to check the overall volume of the fuzz against your bypass sound. 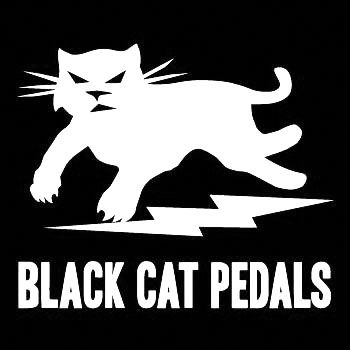